Hope that all of you are enjoying the beautiful fall weather! It’s been a great month at COASST, and we’re looking forward to seeing many of you over the next 2 weeks with trainings in Alaska, Washington, and Oregon.

Have you had any rainy surveys lately? If so, now is a great time to check on your kit supplies. Let us know if you need more “rite in the rain” datasheets, additional cable ties, chalk, etc.  We’re happy to help!

We’ve had some great photos come in to the COASST office recently.

Let’s take a look at What’s Washed In: 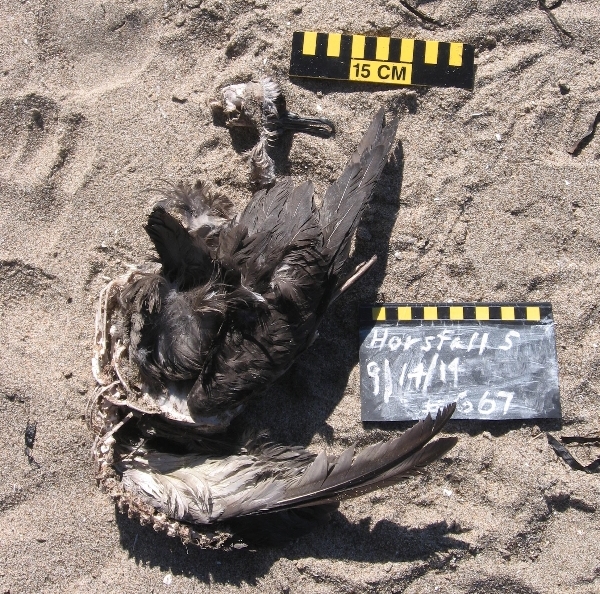 Ken and Cathy found this bird on September 14 at Horsefall South in Oregon.

Here we have a black bill with tube (some of us know where to go already), but let’s use the wing as a guide. 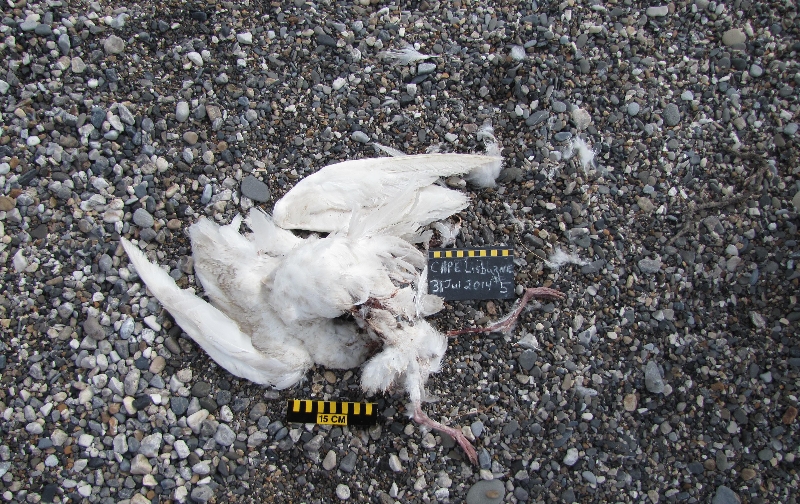 This bird was found at Cape Lisburne in Alaska on July 31 by Alaska Maritime National Wildlife Refuge Staff (just returning from an eventful field season).

Cape Lisburne is the northernmost part of the Alaska Maritime National Wildlife Refuge. Check out this video of the remote islands monitored by refuge staff. 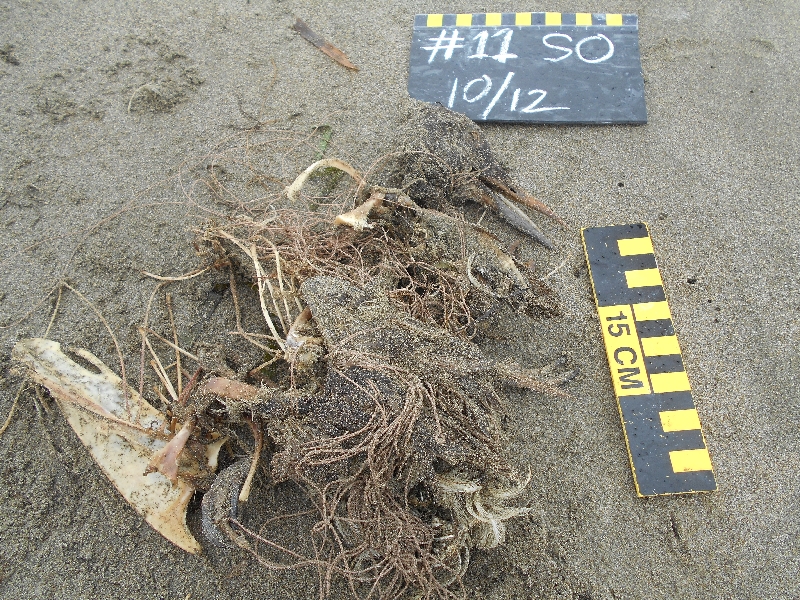 This bird was found by University of Washington Marine Biology students at South Ocean on October 12.

Start with the foot key (Alaska: p34, West Coast p22): webbed (go to Q2), completely webbed (go to Q3), 3 webbed toes (go to Q4), foot way less than 50mm – Alcid. We’re a little stuck on the family page since we don’t have a wing, but at least our first list includes:
West Coast: Common Murre (AL2), Pigeon Guillemot (AL10) – and we can eliminate a slough of other Alcids with dark bills since their tarsus measurement is way short.
Alaska: Common Murre (AL3), Thick-billed Murre (AL5), Pigeon Guillemot (AL7), Black Guillemot (AL7). Same here  – we can eliminate a bunch of the small Alcids with dark bills – tarsus measurement too short.
Upperwing (middle of photo) and foot (lower left) are all dark – Common Murre.

Importantly, this bird is entangled (marked as “L” for line on the datasheet), a relatively rare occurrence (1/200 birds, or 0.5%). This marks the 35th entangled bird since the start of 2014 (or 1.4% of new birds in 2014), a number elevated by a single survey at Slip Point (WA) where Janet found 20 birds (mostly Sooty Shearwaters) washed up in a net. 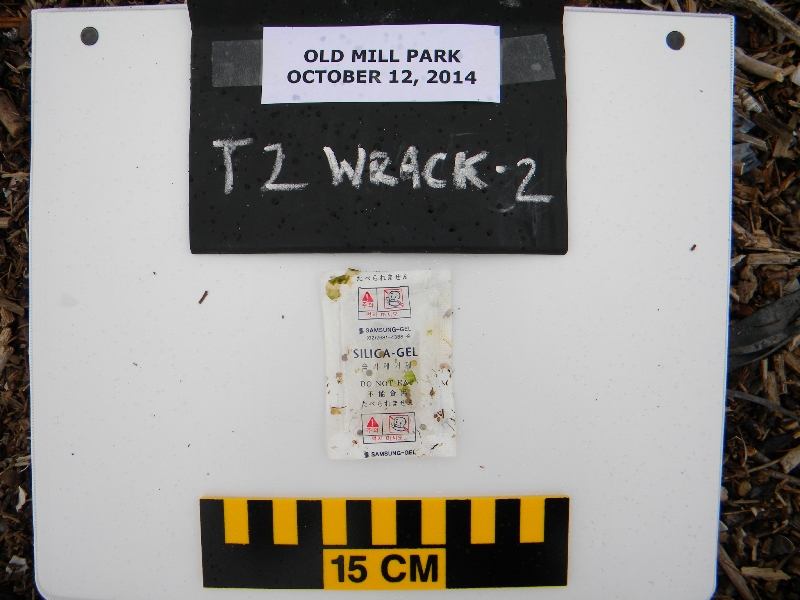 During his marine debris survey at Old Mill Park in Washington on October 12, Lee found this silica gel pack. It has a couple of great examples of symbols that can be recognized internationally as potentially hazardous to human health. COASST is keeping track of such information to better understand the amount and type of hazardous materials among debris objects. 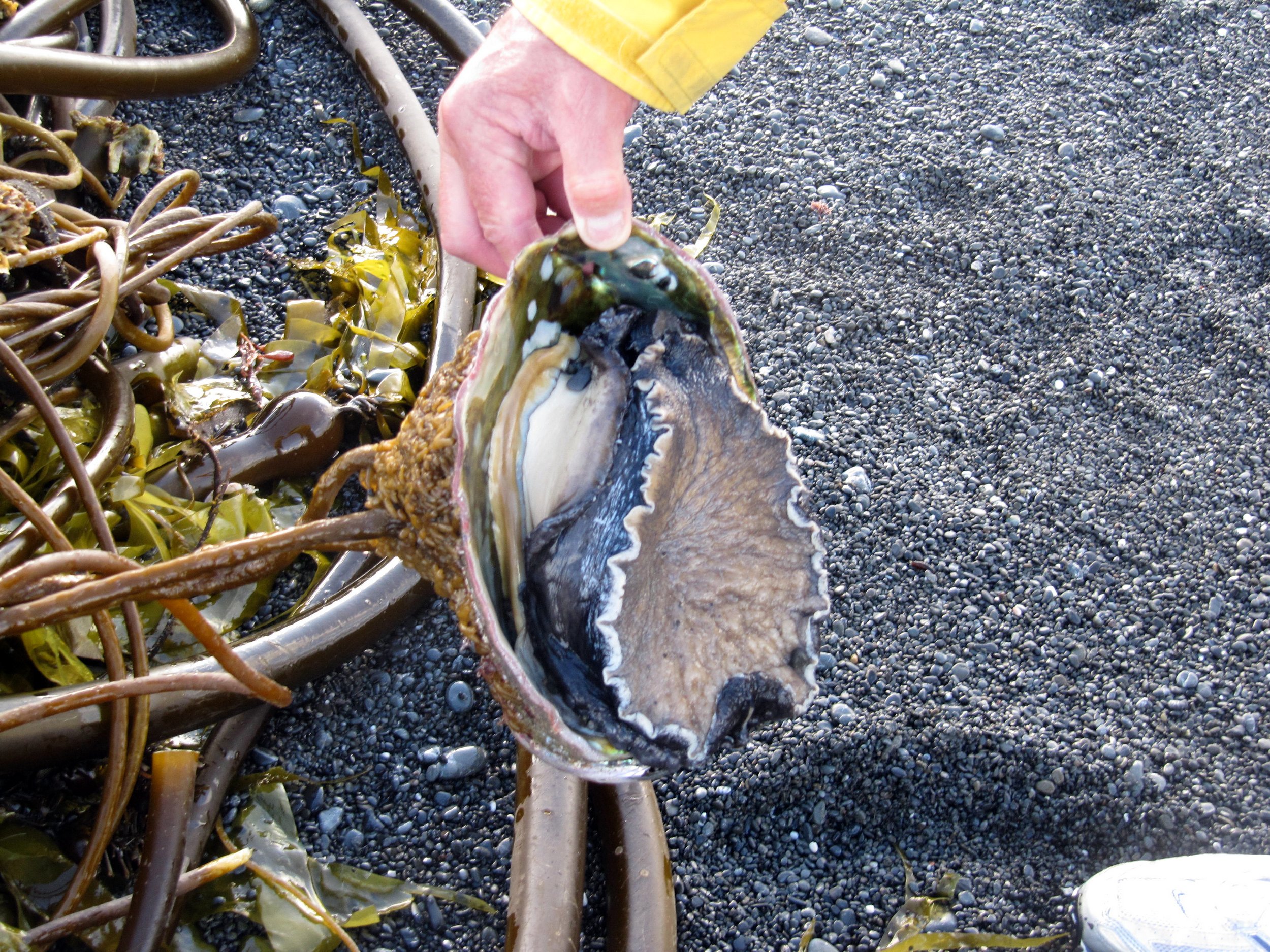 Gene and Keith found this abalone at Shipwreck Point South in California on September 25.

Abalones move relatively short distances over their lives and attach themselves to rocks, waiting for kelp and other algae to drift by. Using their large foot, abalone anchor themselves and also grab onto food. Once they have a piece of algae, they can then use their radula, a tongue like organ lined with small rows of teeth, to break it down into smaller pieces.

Here the holdfast of the bull kelp is attached to the shell of the abalone. It’s hard to say who is winning!