This winter, COASST marine debris student interns embarked on several field trips across Washington to develop and refine a preliminary protocol for the new marine debris program. Interns this quarter included a photo team, Abby and Jessica, and a field team, Angeline and Kaili.

Reports from the field:

A total of 14 beaches so far, from Deception Pass to Ocean Shores! Discovery Park was our first stop, to trial the small debris survey methods – lots of beach glass at both this site and Alki Beach. Together with service learning students Christie and Yi, we visited Whidbey Island beaches Ala spit, Penn Cove, Joseph Whidbey State Park, Fort Casey, and Useless Bay. The physical differences between these five sites was quite surprising (substrate, wood, wrack, bluff, dunes, exposure) given they’re all within a few kilometers of each other. Special thanks to COASSTers David and Candace, who oriented us to their beaches and shared some (much needed) chocolate!

Christie paces the width of the beach on a medium debris transect at Penn Cove (Whidey Island).

From the Puget Sound, we ventured to Ocean Shores to check out North Jetty and South Taurus beaches. Super wide, sandy beaches made the marine debris surveys much slower than those in Puget Sound.

The following week we returned to Ocean Shores to survey Damon Point and North Jetty to see if debris had shifted/accumulated/changed. We also visited the annual Beachcombers’ Fun Fair where we saw Heidi (COASST staff), and other marine debris enthusiasts, Curtis Ebbesmeyer and Alan Rammer. The collections and displays at the festival (that’s right, 44 exhibit categories, including “assembled unadorned pieces of driftwood”) helped us identify many objects we’ve been seeing in COASSTer photos and on our beach surveys!

Out at Damon Point, we almost lost our small debris surveyors (and equipment!) to a rogue wave. For the rest of the trip, we trekked all the way around the perimeter of Damon Point looking for particularly complex/interesting items to add to our marine debris teaching collection. Where did we find the most stuff? At the very tip! (fingers/points/spits tend to snag debris and birds – just ask the folks at Ediz Hook or Dungeness Spit).

During spring and summer quarters, we’ll continue to test and refine the marine debris monitoring protocol, getting it ready for Prime Time! Angeline, Abby and Kaili (left to right) celebrate on the northern edge of Gray Harbor (Ocean Shores) after a long winter’s day of marine debris monitoring (shoes not required).

On October 5th and 6th, the COASST interns and the University of Washington’s marine biology class drove to Ocean Shores, WA for a day of beached bird surveys. The interns and students learned the COASST survey protocol and got lots of practice identifying and tagging beached birds. The bird identification started off slow but the teams were quick to pick up the new skills as the day went on. By the end, they were identifying, recording data, and tagging birds with ease. Eleven beaches were surveyed over the two days. Common Murres were by far the most abundant bird found. They were seen in breeding, non-breeding, and molting plumages which added an extra challenge for these new surveyors. Other commonly found birds included, Sooty Shearwaters and large immature gulls.

The teams also came across some rare finds. At South Chance, a beached yellow shafted Northern Flicker was spotted. It can be identified by the vibrant yellows found in the wings. Another team happened upon a skate egg casing, with small embryos inside. Not a bird, but a very cool thing to find!

Overall it was a great weekend. The weather was beautiful, with no rain, making it an enjoyable learning experience for all. This skate egg casing was found during one of the surveys

This past weekend, the COASST interns (Shannon, Adrienne, Chelsea, An, Stephanie, Hilary) road tripped down to Long Beach, Washington and Cape Disappointment to do a COASST survey . It was a chance for all of us to experience conducting their own survey and learn more about beached bird species identification. Perusing the coast under the grand Pacific Northwest sunshine. There’s nothing better than that. Liz (left) and Adrienne (right) head out to Klipsan beach to start their survey.

Adrienne scans the surfline for any birds that might have washed up on shore.

It wasn’t long until we had our first find. It was a wing that had been partially buried in the higher portion of the beach, and the team quickly got to work to try and identify what they had found. The next step was to determine the species! Liz points out mottling on the upperwing. Eventually we decide: Large Immature Gull.

Adrienne takes a couple of photos of the Large Immature Gull wing.

Soon we were on a roll. Not too much further from our first find, we come across another find: just a head! Liz shows us the starting point of the bill measurement. Our last find: a Sooty Shearwater –  a seabird with one of the longest migration routes ever recorded: 39,000 miles.

After COASSTing, we had the rest of the day of explore Long Beach and Cape Disappointment – not a disappointment in any sense! Amazing trip out to the COASST with Barbara Blackie’s “Topics in Marine Ecology” class at Western Washington University. Barbara, a former COASST Volunteer Coordinator, uses COASST surveys as a learning opportunity for numerous college students. As all COASSTers know, you can’t head out to the beach without looking for (dead) birds!

COASST finds made up for the less-than-ideal weather – a couple of Black-footed Albatross, a Rhinoceros Auklet (complete with white leading edge), and a Sabine’s Gull (distinctive white upperwing triangle). Students from Barbara’s class show just how much wrack can accumulate.

We followed up COASST surveys with a walk on the Cape Flattery trail, with some stunning views of Gray Whales, Tufted Puffins, and migrating geese. After all that, how could you not want to become a marine biologist?

View from the Cape Flattery Trail, with Tatoosh Island in the background.

On April 20th, the COASST interns went on our quarterly field trip. This spring, we went to the south coast of Washington and surveyed South Leadbetter A and Oysterville Beach, both north of Long Beach, WA. The eight of us set out from the University of Washington at 7am sharp, reaching Long Beach at around 11 am.  Once there, we met up with a local COASST volunteer and split into two groups. One group went with Liz on South Leadbetter A, and the other with COASST Senior Intern Stephanie, on Oysterville Beach.

These field trips allow us to get hands-on experience surveying beaches and identifying beached birds. We found two birds to practice our ID skills on–a set of Red Phalarope wings and a Herring Gull, both on South Leadbetter A. The weather was surprisingly nice that day; the rain stayed away, and the sun even made an appearance. There were some people out flying kites and taking walks on the beach, and even a few horseback riders. A great time was had by all.

Shannon, Scott, and Elizabeth collaboratively bounce observations off each other as Liz challenges their ability to identify! The following is by Clinton Stipek and intern at the COASST program:

Over this last weekend the COASST interns and Liz had the treat of going on a guided tour at the Woodland Park Zoo! The weather was great and our guide, Alastair, knew just about everything under the sun about the animals. Alastair is a COASST volunteer who also works as a docent at the Woodland Park Zoo. He offered up his Saturday to teach the COASST crew new facts about the animals (birds and non-birds alike) and give us insight into what it is like to work at the zoo. Alastair and the interns

We had a great time and were able to tour just about every exhibit they had. My personal favorite was the Stellar’s Sea Eagle. I had no idea how big they truly were. With a wing span of 6-8 feet and weighing in at 15-20 pounds they are the largest and heaviest eagles. They are magnificent creatures and it was a real treat to see them in person. Some of the other cool things we saw were weavers making nests in the Savannah Aviary, Humboldt Penguins swimming around in their exhibit and brightly colored Toucans. Overall, it was a great day. We learned a lot and had a blast! 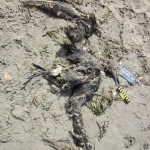 The COASST interns even found a Black Footed Albatross, what a day! 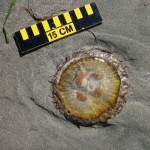 Hundreds of these jellies were spotted washed up on South Leadbetter 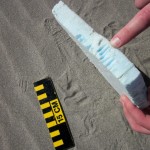 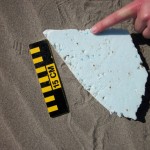 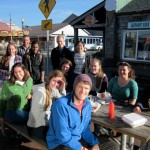 The COASST interns of Autumn 2012 chow down after a great day of surveying in the sun. 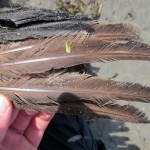 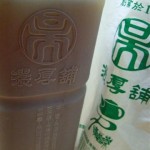 Before our piece of marine debris made it to the USA, it probably looked like this! A plastic jug that stored tea. Mystery solved!

Marine debris from Taiwan washed up on the Washington coast. A former COASST intern translated the characters for us, which say: “Jellygrass Tea Shop.” With this info we were able to search for this tea shop online. Check out the next photo so see what we found!