Hope your week is off to a great start. With the fall weather upon us, now is a great time to check your COASST supplies and make sure you have plenty of rite-in-the-rain data sheets. Looks like there will be lots of rain in the future. We are lucky to have such a great group of volunteers who face the cold and rain to collect these valuable data. Here’s a look at a few of the many things found along our coastline in the last few weeks. A Short-tailed Shearwater found by Ken in the Chukchi. Three webbed toes with a 4th minute (tiny) toe and flat heel puts this bird in the Tubenose: Petrels family. And a wing chord over 20 centimeters let’s us know it’s not a Storm-petrel.

Using Beached Birds, look at the bill shape and tarsus. A thin and long bill and flat tarsus lead us to the shearwaters. We have three to choose from: Sooty Shearwater (TN5), Short-tailed Shearwater (TN7), or Pink-footed (TN15). We can rule out Pink-footed: mostly pale bill, white throat, belly, and underwing linings. With underwings that are more gray than white and a shorter (29-34mm) bill, this is a Short-tailed Shearwater. Great Blue Heron feet found by Stanley and Resha in the South Coast of Washington. Time for some practice with the foot key. Free toes send us to Q9. Three toes in front, one in the back sends us to Q10. None of the toes are fused – go to Q11. With a tarsus over 150 mm, four toes of the same length, and a comb-like nail on the middle toe, we’re looking at a wader. You’ll notice the “waders” label is in italics. This means Wader species are not part of Beached Birds, so we can’t go any further – writing “Waders” on your data sheet is just fine. An owl found by Cathleen and Daphne in the San Juans. Here’s another chance to practice with the foot key. This foot follows the same path through the guide as the wader, except a tarsus less than 150 mm will send us to Q12. With multiple claws and a feathered tarsus we’re looking at a Land Bird: Owl. Again this label is in italics: no species profiles of owls are included in Beached Birds.

A Northern Pintail found by Kathy and Lyn on the South Coast of Washington. Now for some practice with just a wing!If you are using the wing table, at 25.5cm this wing falls in the Med-Lg category. That iridescent stripe in the secondaries is called a speculum, giving us four options; Northern Pintail (WF9), Mallard (WF11), White Winged Scoter (WF3), King Eider (WF21). Out of these birds, the only one has a tan-dark-white speculum pattern, from leading to trailing edge: Northern Pintail, male.If you are using the west coast wing key, select secondaries contrasting and dark sending you to Q18. Then choose tan stripe above and white below secondaries. A measurement of 25.5cm is well above the range for Green-winged Teal.If you are using the Alaska wing key, select light or dark speculum and/or one or more white patches taking you to Q17. Here choose dark speculum, no patch leading to Q24. Speculum with buffy stripe above and white below gives you a Northern Pintail, male. A blue drum found by Heather in Oregon. Drums like this one, found on the beach, can sometimes contain hazardous chemicals. If you find an item like this, do not touch or attempt to move. These items should be reported to the National Response Center by calling 1-800-424-8802 or visiting their website.

We may be the only people in the fisheries building to see this and think, “yes!”

Late afternoon, in the fisheries building parking lot and Jane comes across this find. Seven years bad luck? Should she call it quits and leave work early?

Nah – bag and freeze and tell Matt (Senior Intern) there’s another bird waiting to be added to the COASST teaching collection. Thanks Peregrine Falcon, for leaving your lunch for us.

Based on its size, some people mistake this bird (in wings-only form) for a Common Murre. It’s not! Upperwing is not uniformly dark, feet are pink and not webbed. It’s a Rock Dove (aka Rock Pigeon or just pigeon).

How’s this for rare?  A new-to-COASST foot-type family, found on a North Coast beach! Sue Keilman and Scott Horton found this Virginia Rail on their Third Beach survey.  In the Beached Birds field guide, rails are most closely related to the American Coot. As seen in the guide, coots have lobed toes that recall those of the grebes. This rail, however, has four free toes, three of which are very long and spindly. As you can see in the photos, the longest toe is virtually the same length as the tarsus! As usual, foot type betrays function: rails are perfectly suited for walking on soft, marshy substrate and floating vegetation.

What surprise will COASSTers find next? The first Virginia Rail found on a COASST survey. Note the three long toes and one short toe. Checking in with former COASST staff finds Annie Woods very much absorbed by her passion for farming. After leaving us Annie joined Local Roots, an sustainable urban farm owned by Jason Salvo and Siri Erikson-Brown. An intense growing season featured everything from beets to broccoli. Come winter Annie accepted an internship at Green String Farm in Petaluma, California where she joined 10 other interns from around the country with a similar goal of starting their own farms. Planting, pruning, composting, baking, irrigation, integrated pest management, butchering, candle-making, fat-rendering, ostrich wrangling – Annie did it all. Annie and the ostrich foot

Ostrich wrangling?!? You bet. We won’t go into details, but here’s Annie showing off an ostrich foot. Yeow baby! Now that is a tarsus. With a measurement of 40-50 cm (yup, in COASST units that would be 400-500mm), ostrich tarsi are pretty much as long as it gets. And take a look at the feet – 2 front-facing extremely fleshy toes, and only the longest has a nail. Big padded toes and a long tarsus are a recipe for running really fast – they’ve been clocked at over 70 kilometers per hour. In fact, ostrich feet are a model for above-the-knee amputee prosthetics. Check out those toes!

Although that nail might not look too dangerous compared to the talons of an eagle or a large owl, there’s quite a punch behind it. At 300+ pounds, the force behind an ostrich kick is enough to slice open an approaching predator – or unlucky person. Ouch! Given how fast they can run, best to stay away.

COASSTers might not be seeing this on the beach (we can only hope), but we thought we’d share a “foot-type moment.” Got a rare one? Send us a photo and your foot-type story.

Marine Biology students participating in a survey with COASST staff and volunteers encountered the first snowy owl to be found on a COASST beach! 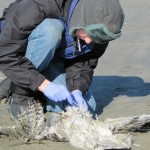 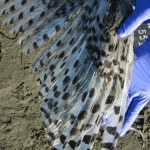 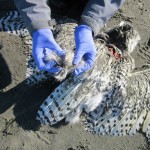 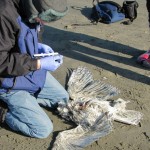 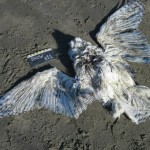 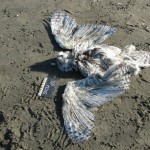 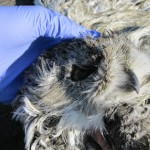