Hope you had a great Thanksgiving holiday with family and friends. Thank you for all of your data over the long weekend and, of course, for all of your staged “turkey on the beach” photos too!

It was great to see some of you at the Olympia and Port Angeles (WA) classroom refresher trainings on the 21st and 22nd. Erika and Heidi really enjoyed it!

Thank you to all of you for hard work, especially during these colder months. It is very appreciated. 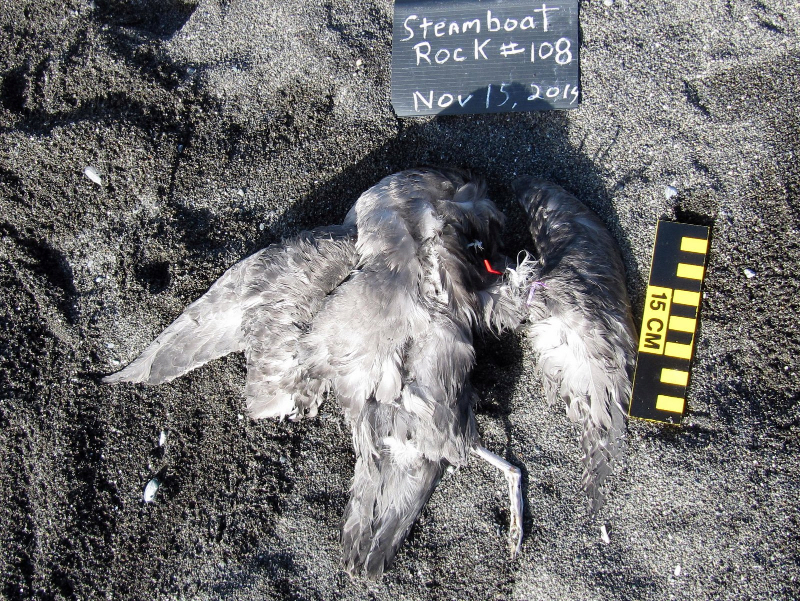 The jaegers are out – the tarsus of this bird is too long. Crows have “completely black plumage” so we’ll opt for Northern Fulmar.

Natural history notes: Peak beaching for Northern Fulmars in Alaska (where they breed) is July/August. Along the West Coast (where they spend the winter) November/December can be particularly high. In December 2003, COASST participants in Oregon North found an average of 11 fulmars per kilometer! 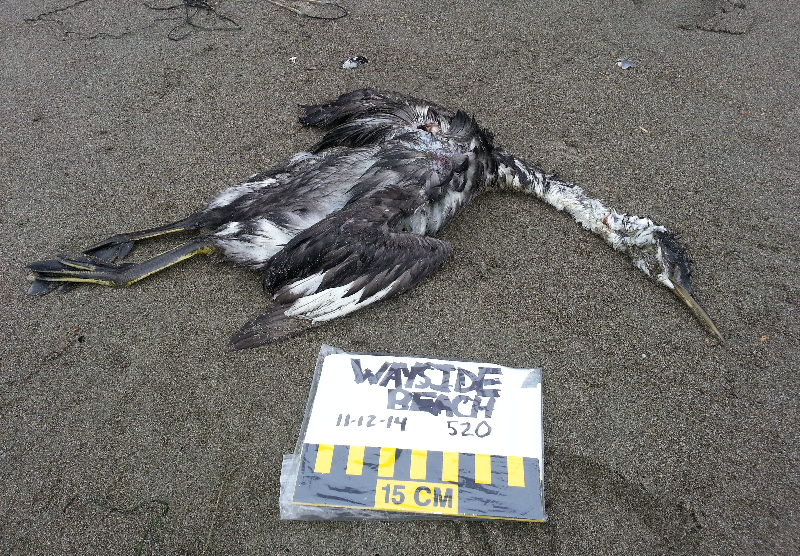 Alaska participants – stop here – this bird is found farther south.
West Coast guide GR1 – wing chord > 18cm, so we’re down to Clark’s Grebe (GR1), Western Grebe (GR1) or Red-necked Grebe (GR4). RNGR has a much tinier bill and between the CLGR and WEGR, the Western Grebe is the one with the eye surrounded by dark facial plumage. 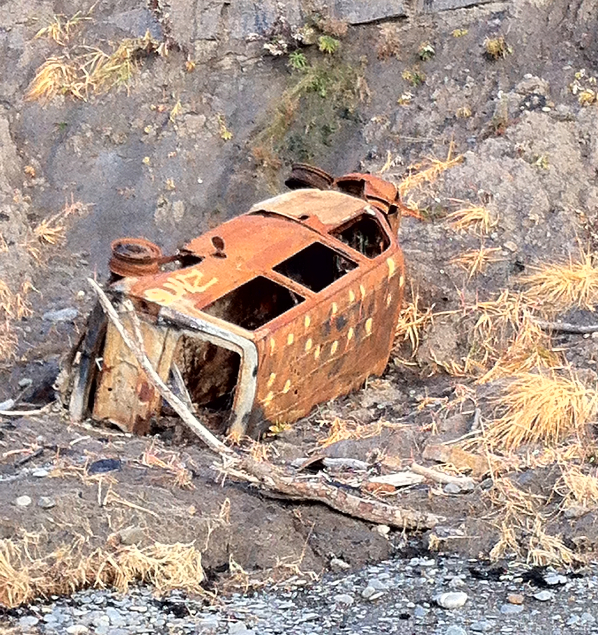 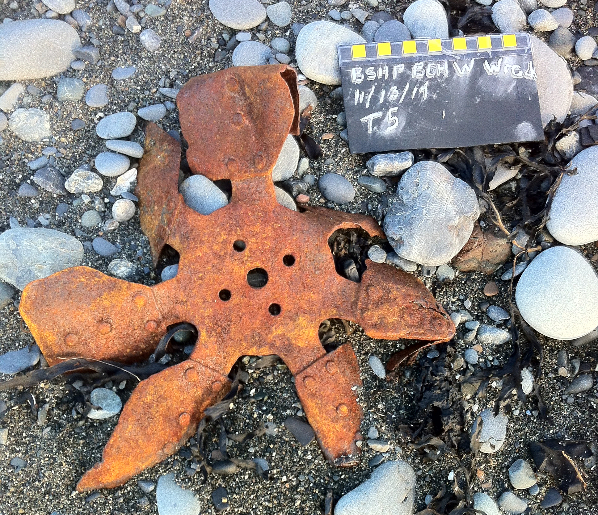 How often are land based vehicles found as marine debris? Only once that we know about on a COASST survey. Marine debris pilot testers Paul and Louise conducted their first survey on 11/13/2014 and found encountered this rusted van on Bishop Beach West. A little ways down the beach, the radiator fan was in their medium debris sample. 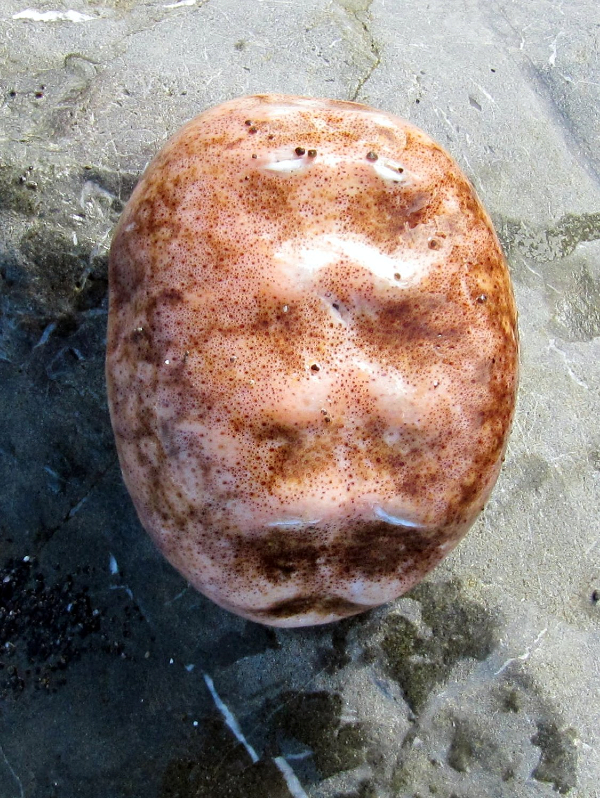 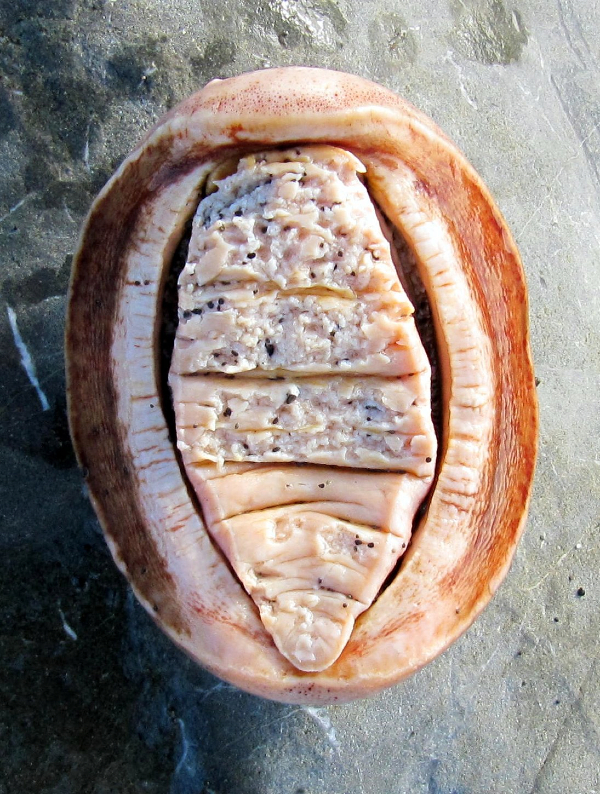 Take a look at this gumboot chiton that washed in near Cape Mendocino.  This species is the largest of all chitons, growing up to 14 inches in length and weighing over 4.4 pounds! Gumboot chitons inhabit rocky coastlines from California to Alaska, across the Aleutian Islands and south to Japan. What’s unique about this species is that the 8 plates on their body are hidden by their reddish-brown skin, or girdle. The underside is bright orange or yellow, consisting mainly of a large foot. They also have a retractable radula with rows of teeth to help them consume marine vegetation, such as sea lettuce and kelp.