I started this project based on an unexpected, and extremely frank outburst of a family friend during an Easter dinner. While I at my steak, carefully holding my meat to the plate with my fork held in my left hand, and slicing it apart with a knife in my right, this good friend’s Austrian grandmother barks, “Vhere did you learn to eat like zis?!” As an 18 year old kid who knew little to nothing about etiquette except those times I had my elbows forcibly pushed off the table, I was completely taken aback. So when the opportunity came to choose an item to study, this interaction from years ago came flooding back and the choice was obvious: The Fork.

The quote which is the title of this piece, is from Joseph Brasbridge and was spoken during a dinner with a British aristocrat, highlights one of the key separations between social classes that the history of the fork highlights. Far from being a “humble” eating utensil the fork was a clearly defined status item for the majority of its European existence, usually being crafted of gold or silver, and its use limited to largely the wealthy.

And the reason? There are a few. The Puritans who were a large portion of the colonizing population weren’t fans of the fork. They felt was a sin to not use the forks that God gave you, your fingers. Not only that, many British of the 17th century thought that using a fork was a sign of effeminacy. There’s also a series of laws know as the Navigation Acts, that severely limited what the colonies could produce and trade, and forced any goods going into the American Colonies to go through England first ensuring taxation, tariffs, and price gouging. Up until the mid-18th century, the colonists didn’t want or need forks and they were outrageously expensive. 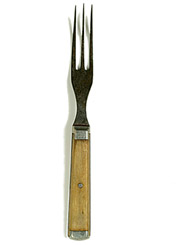 Then what changed that caused American Colonists to suddenly want forks and be willing to spend up to forty percent more for them? In the 1720’s American colonists were becoming more and more British after years of trying not to be British at all. During this period the Georgian style architecture was changing the way cities looked, tea sets were being introduced and suddenly more and more people are using forks. What had originally been viewed as a needless expensive item was now a must have marker of social status and ‘Britishness.’

1 thought on ““I know how to sell these articles, but not how to use them””