The Columbia Center is the largest structure in the city of Seattle and the also the largest in the state of Washington. In fact, the Columbia Center is the 2nd largest structure on the entire West Coast and stands at 943 ft. tall. The only other building that is taller is the U.S. Bank Tower located in Los Angeles, CA. The construction of the building was completed in 1985 by Howard S. Wright Construction. The original architect was Chester L. Lindsey and the design was done by Martin Selig. 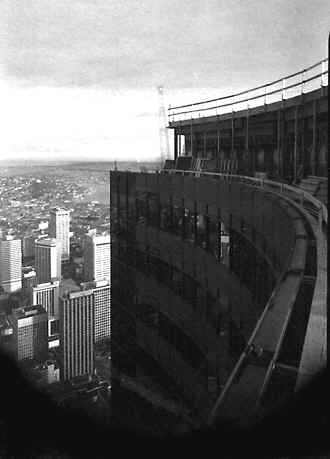 The Columbia Center went through various name changes such as the Columbia Seafirst Center and The Bank of America Tower before ultimately being called the Columbia Center. Many businesses such as banks, tech companies, and law firms are located within the building. There is also an observation deck located on the 73rd floor in the tower called the Sky View Observatory and is open to the public! So if you aren’t afraid of heights and enjoy scenic views this might be worth the trip!

Although this building is not fairly old, it surely is one of Seattle’s most iconic and recognizable buildings. Features of the building such as viscoelastic dampers and triangle shaped bracing make the Columbia Center resistant to hurricane force winds as well as earthquakes. Anyone who is interested can now purchase the Columbia center as it is currently for sale. Beacon Capital Partners bought the building for $621 million dollars in 2007 so it is speculated that the Columbia Center will sell for more than that!

Here are a few links to look at!
http://www.historylink.org/index.cfm?DisplayPage=output.cfm&file_id=2627