Growing up in Port Townsend, I was lucky to live fairly close to three fascinating state parks: Fort Worden, Fort Flagler, and Fort Casey. These were coast artillery bases, positioned to form a “deadly triangle” at the entrance to Puget Sound, to protect the naval bases further into the Sound. They were constructed at the turn of the 20th century–from around 1897 to 1903. Each fort had a series of concrete bunkers and artillery pieces facing out to the straits, and barracks and houses for the enlisted men and officers, respectively. 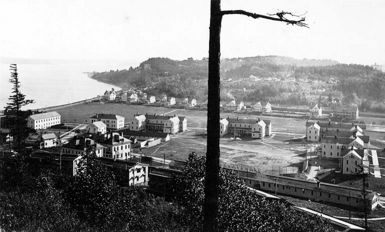 The forts became obsolete fairly quickly, as the technologies developed during the First World War meant that aircraft could put the stationary artillery pieces out of action without much trouble. Even during the war, some of the artillery pieces were removed from these forts, shipped to Europe, and converted to railway guns. However, the forts remained under the control of the military until the ’60s or so. At some point thereafter, Fort Worden was turned into a sort of reform school for a while, with its barracks housing delinquent youth. After that, it and the other two forts became state parks, with most of the bunkers open to the public.

Firing one of the guns, Fort Worden.

The early history is fascinating in its own right, but its role as a source of inspiration for me comes more from the forts’ “afterlives.” Although the guns and equipment have been removed from almost all the bunkers (with only a few examples left at Fort Casey), the concrete buildings are mostly intact.

Some had traces of their old fixtures, and occasionally some stenciled lettering on the walls. There was a low-level but constant application of graffiti.  In fact, early on, some of the bunkers in fort Worden were in a remarkable state of benign neglect, perhaps because they weren’t easy to find. I remember in particular one set of underground rooms, with an entrance hidden away in the woods, that the park staff had somehow neglected to lock up. For an adventurous kid, it was a really exciting experience to gingerly descend the old staircase into a pitch-black, asbestos-smelling room with old rusty machinery in it, my flashlight revealing graffiti of a much higher quality than one fond in other parts of the bunkers. There were old burnt-out candles and bottles scattered around–from either a pseudo-Wiccan ritual or a D & D match, I guessed. I will never understand why the park left that room open, but I’m really glad they did. It was a rare bit of excitement and perceived danger in otherwise far-too-safe Port Townsend. It was also a place I could proudly show my friends, something weird that I had discovered. For a while, I walked there almost every day during the summer.

Of course, now they have locked those rooms off, and started “restoring” them to the way they looked in the Second World War, when they controlled radar and magnetic apparatus for the Navy. A nice old volunteer from the Coast Artillery Museum showed me around one day when they were open, and taught me a lot about the purpose behind the building. Indeed, when I was very young, I had always wished that some of the bunkers were kept in the same state they were in during their early days.

However, I was very sad to see that they’d chosen this bunker to “restore.” All the graffiti was painted over, and all the signs of vaguely illicit youth activities had been scrubbed from the floor. The smell of old asbestos insulation was replaced by the smell of fresh paint, and forty or fifty years of activity had been essentially erased from the room, in the interest of showing people the history that the Coast Artillery Museum considered important, which is to say the military history. I’ve always been a military history buff, and so really I should be grateful that the museum has gotten serious about exposing more people to it, but at the same time, the more recent significance of that room–as an example of the bunkers’ significance to the generations that grew up playing around in them–has been subsumed under the desire to express an official history.

After long months of procrastination, I’ve finally updated my own blog, Improbable Artifacts. I’m not going to cross-post here, because the latest post is very long, and more travelogue and cultural commentary than historical archaeology (though I did name-check James Deetz). However, the blogging we’re doing in this class has got me thinking about renewing my own efforts, and I thought it would be worth sharing a link.

I have been trying to return to the kind of writing I enjoyed in college, which is to say lots of free-association that somehow ends up looking like an argument after a while. Obviously this isn’t the kind of thing one sees in Nature, or even in a halfway-reputable middlebrow publication like The New Yorker, nor do I encourage you to emulate it at all, as it will probably get you banished from polite academic and literary circles.

Writing travelogues is especially tricky for obvious reasons: dropping in on an unfamiliar culture and commenting on it as if it were a coherent whole is perhaps acceptable in archaeology, but doesn’t fly when we’re talking about living, individually distinct people. (why archaeologists still get away with it is a bit of a mystery to me, but that’s another story). At the same time, anyone who’s traveled will know that there are certain senses of place and culture that are worth remarking upon, even at the risk of generalization. Talking about another culture is still one of the most convenient ways to comment on one’s own, through comparison. So, I try to convey those impressions while at the same time acknowledging that there are other realities out there that I haven’t touched on.

However, if my most recent post has value for the purposes of this class, it’s as an example (albeit kind of sloppy) of creative nonfiction style, of a sort that works well in blog posts. Notice that I alternate between reporting experiences and interpreting them, back and forth. Too much of one or the other will bore the reader to tears, but moving between the two allows for a number of things besides keeping the reader entertained. You can constantly refer from experience to theory or interpretation and vice versa, so that each remains a readily available reference for the other. This in turn adds a kind of hermeneutic quality that usually doesn’t survive the rigid division of academic papers into sections of theory, observations, hypotheses, etc. Finally, it ties the abstract, argumentative qualities of your theory and interpretation to a more concrete, graspable narrative, which, as we’ve seen, has many functions that go deep into the human subconscious. For those reasons, alternating story and interpretation every couple paragraphs or so is a useful thing to do in your blog posts, when it’s possible. Sometimes it doesn’t work–that’s always a judgment call you’ll have to make on your own. In the case of my own post, perhaps it didn’t work, but I be you can find others out there where it does.

In the course of reading your excellent posts on the garbology project, it occurred to me that just as we have been talking about “foodways” as a label for the entirety of human behavior surrounding food, we need to think more about the full range of human behavior that relates to the throwing away of things—garbageways, to coin a term.

This may seem like less of a universal phenomenon than the eating of things—after all, we tend to think of the discussion of garbage as a relatively recent phenomenon. Yet people have been discarding things since before they were anatomically (not to mention behaviorally) modern Homo sapiens. The few odd bits of debitage that survive from the production of Oldowan tools attest to this fact, but doubtless there were also discarded bits of husk, bones, and the pieces of plant or animal that could not be transformed into perishable tools. In fact, archaeologists interact primarily with things that have been diverted from use by human garbageways, and thus understanding the full range of waste disposal behaviors should really be obligatory, if we hope to interpret the archaeological record with any degree of accuracy.

For example, the near-absence of certain valuable materials in the archaeological record, depending on broad contexts, must often be attributed to recycling or repurposing. A rather vulgar but illustrative example of this phenomenon is the Domus Aureus on which the Roman emperor Nero wasted huge amounts of public money during his reign. Naturally, archaeologists have never found remnants of the tons of gold and precious gems (not to mention Parian marble, bronze sculpture, etc.), that were devoted to the house’s construction, because after Nero’s assassination, these were diverted from the stream of garbage that leads to the archaeological record. In fact, the very recycling of the Domus Aureus could be interpreted as a political act, in the same way as one might interpret participation in certain foodways as a political act (think, for example, of Kirk’s careful parsing of ingredients to make her PB&J sandwich in class today: she took pains to explain that the use of wheat bread and jam with seeds left in put her in a distinct socio-political group).

Thus, our consumption and abandonment of materials share many, many qualities, most of which are useful from an archaeological perspective. Thanks for your posts; I’ll send you each some comments on them soon.