I am a PhD student in the UW Archaeology program and the Teaching Assistant for this year’s Historical Archaeology class. I was previously the TA for this course during Spring 2015 and am looking forward to doing it again.

I received my BA in Anthropology from The Ohio State University and an MA in Anthropology from UW. My PhD research is a study of ceramics from the Late Iron Age in Mallorca, Spain, a time when indigenous Mallorcans were increasingly connected with outsiders like Phoenicians and Romans. I am particularly interested in the dynamics of these cultural interactions. My research is a small part of a larger collaboration between UW archaeologists and archaeologists in Spain which we have dubbed the Landscape, Encounters, and Identity Archaeology (LEIA) Project.

Before beginning my work in Spain, I worked on a number of projects and sites in southwest and central Ohio, mostly focused on what archaeologists call the Fort Ancient culture. If you ever find yourself in southwest Ohio, the museum and reconstructed village at SunWatch Indian Village and Archaeological Park make it worth a stop.

Outside of Denny Hall, I am the proud dad to Nikhil. Objectively speaking, he is the best baby in the world. As an archaeologist who works at the intersection of tribal historic preservation, colonial studies, and public history, my work brings together anthropological, historical, feminist, and indigenous methods in the study and representation of Native American heritage. My research specifically examines how community-based participatory research can improve the empirical and interpretive quality of archaeological narratives, while also situating archaeology within a more respectful and engaged practice. As a core feature of this work  I am exploring the diverse applications of digital media as tools for contributing to the capacity of tribal communities to manage their historic and environmental resources. In conjunction with these projects I have developed multiple classroom, lab, and field training programs that provide undergraduate and graduate students with the opportunity to participate directly in research with tribal communities and to develop student-directed research that contributes to the capacity of these communities to study, manage, and represent their heritage.

This work centers on my ongoing collaboration with the Kashia Band of Pomo Indians at Fort Ross State Historic Park, a former Russian-American Company mercantile settlement (1812-1841) in northern California. The goal of this partnership involved the development of the Kashaya Pomo Interpretive Trail, a walkable cultural heritage trail and companion website that features the history and heritage of the Kashia within their ancestral homeland. Within the context of this work, community-based participatory research with both the tribal community and the California Department of Parks and Recreation provided the basis for itnegrating Kashaya cultural protocols and values into the study, management, and representation of their heritage within Fort Ross and their ancestral homeland, Metini.

Since coming to the University of Washington in 2013, I have initiated a new, multi-year community-based partnership with the Confederated Tribes of Grand Ronde Community of Oregon (CTGR) and their Tribal Historic Preservation Office (THPO). The goal of this collaboration is twofold: first, to conduct an archaeological study of 19th and early 20th century sites associated with the community’s settlement onto the Grand Ronde reservation, which was created by executive order in 1855, and second, contribute to the capacity of the CTGR THPO to manage tribal cultural resources on its reservation lands. This summer our project will host a 7-week field school, Field Methods in Indigenous Archaeology, where undergraduate and students will work alongside tribal students and  the Grand Ronde THPO to study the history and development of the 19th century reservation landscape.

When not in the field or the classroom I am often found road tripping across the U.S. to find interesting, old things, trying not to kill the plants in my kitchen garden, or baking cupcakes and pies for lucky students. One of the many flowers I’ve stopped to stare at. This one’s called periwinkle (Vinca minor).

My name is Tiauna Cabillan. I’ve been living in Seattle for the better part of the last two years, and have yet to fully explore the various eateries, scenery, and other things the city has to offer—though I hope to do so in the future. I am currently enrolled at the University of Washington as a second-year undergraduate student. This quarter will be my first as an anthropology/archaeological sciences major. I’ve yet to narrow down my interests much, but I hope to find ways in which I can explore topics such as sustainability and inequality through anthropological and archaeological perspectives.

Outside classes, I spend my time drawing, crocheting, baking, and being sidetracked by the campus’s ubiquitous plant life (about which I admittedly know little, but hope to learn). Hello all! My name is Kyle Hancock. I am currently a GNM student at the University of Washington. I received my BA degree in anthropology with an emphasis in archaeology from Eastern Washington University in 2013. It is my goal to gain admittance to the PhD program here at the University of Washington eventually but I am enjoying the adventure along the way! I am originally from a small desert town in Wyoming and grew up looking for arrowheads out in desolate sagebrush covered hills of what was once home to a completely different group of people than those I was familiar with. For some peculiar reason I was always drawn back out into the desert to make some sort of connection with this “other” group of people and thus my fascination with archaeology began without me even realizing what is was. Much like finding an arrowhead, sometimes these things just happen to find you.

Outside of the academic arena I enjoy music, backpacking, exploring, and gaining insight into all different aspects of life. My journeys have led me to many different places including; wild and sprawling concrete jungles, high mountain peaks, seemingly never ending valleys, and into places that many people never really get to experience. Life has honestly been a magical mystery tour so far and I am anxious to see where it leads me next!

…a recent-ish transplant to the Seattle area from rural Alabama. I’ve spent the last dozen years or so fixing computers and teaching other people how to use them, but about three years ago I decided I wanted to do more than just fix stuff, so I went back to school to find something cool to actually do with all the neat technology I’d been fixing. A lifetime love of archaeology (so many hours spent watching PBS) and a side interest in geology and chemistry led to my perfect mix: using multi-spectral remote sensing, satellite imagery, and GIS for the discovery, analysis, and management of archaeological sites, with a particular interest in areas that are prohibitively challenging to explore in person (see: jungles of Mesoamerica). To wit, I’m majoring in Anthropology (Archaeological Sciences) and minoring in Earth and Space Science, mostly so I can get my hands on all the cool toys. Since I’ll be graduating this quarter, in the upcoming year I’ll be applying to graduate school with the goal of doing research in my chosen specialty.

When I’m not tinkering or studying, I like to read comics and science-y non-fiction, play the flute, zoom around in my Mini Cooper (his name is Jarvis), learn how to make gluten-free food not taste like cardboard, and pretend I’m a real photographer. I’ve also spent the last two years working on the Emma B. Andrews project, digitizing the diaries of a fascinating woman who traveled throughout Egypt during the excavations in the Valley of the Kings from 1889-1912.

Since I prefer to be on the other side of the camera, here’s a picture of the adorable little farm cat I befriended this summer on my study abroad in Mallorca, Spain. 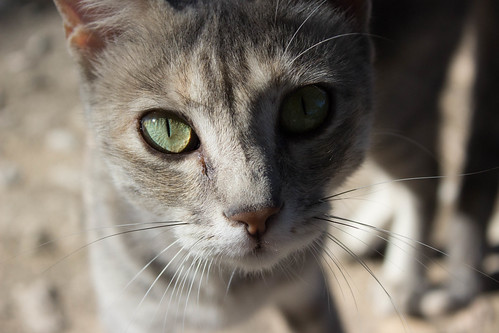 Hailing from a cozy corner of the central Californian coast, Ema moved to Seattle in August 2012 to pursue a bachelors degree in Archaeological Sciences at the University of Washington. Her research interests revolve the intersections of queer and feminist theories with archaeology and deconstructing colonialist and oppressive narratives within the academy. Regionally, Ema enjoys studying the maritime Pacific and Atlantic sub-arctic and is currently working on a research project focusing on the effects of geographic insularity on the formal stone tools of mid- Holocene hunter-gatherers in Russia’s Kuril Islands. In 2013, Ema attended a field school in Vatnsfjö∂ur, Iceland where she worked on excavating a medieval farm mound.

While not actively pursuing her academic interests, Ema can be found scoopin’ up ice cream, crafting/watching tv with her cats, getting emotional about plants or listening to podcasts about ghosts, true crime and science.