As part of our ongoing study of sediment dispersal offshore of the Elwha River, we made two scheduled research cruises in late 2013 (August and November). The goal of both cruises was to service two seabed instrument systems (tripods) and survey the sediment plume, water column, and seabed across the subaqueous delta.

Instrument servicing was overall a success, though a couple unlucky instruments were returned to the shop rather than the ocean. We retrieved some nice data on advection of muds both during the summer dry season and a couple fall rainstorms. One of the photos shows Dan Nowacki and Niall Twomey hard at work in our favorite workspace, the Port Angeles harbor. Hooray for no rain in both August and November!

The ship-based surveys were also successful. In November we made our first Kasten coring attempt since the project began. The most successful site yielded about 40 cm of mud, which represents a huge change from the gravelly substrate seen on many other cruises. A new sandy/muddy deposit is growing outward from the river mouth into Freshwater Bay, while other parts of the delta remain coarse (gravel, sand and the occasional boulder).

The cruises were made possible by help from our dedicated lab crew, including Andrea, Chuck, Emily, Dan, Rip, Aaron, Katie, visiting international students Suzan and Wenhua (their first cruises in Washington State!), Kevin, Julia, and Niall, and also Nicole Harris from Western Washington University (who researches Elwha nearshore changes)—and of course the great crew on the R/V Barnes (Ray, Greg, and Bob). Looking forward to another great cruise in April! 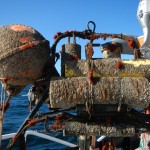 We caught barnacle season during the summer deployment. Lots of scrubbing happened immediately after this photos as taken. 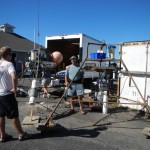 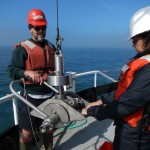 Niall and Suzan set the Shipek to collect a seabed sample 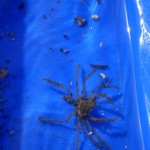 Many portions of the subaqueous sample are still too coarse to sample with the Shipek. That doesn’t mean they always come back empty, though… 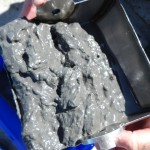 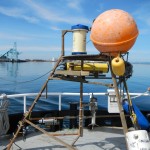 At the end of the August cruise, the secondary tripod was returned to its 22-m site offshore of the river mouth 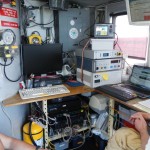 Andrea & Aaron monitor the progress of the sidescan sonar system 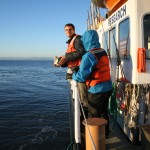