TITLE: Models and Algorithms for the Operation and Design of Bike-Sharing Systems

ABSTRACT: New York launched the largest bike-sharing system in North America in May 2013. We have worked with Citibike, using analytics and optimization to change how they manage the system. Huge rush-hour usage imbalances the system; we answer both of the questions: where should bikes be at the start of a day and how can we mitigate the imbalances that develop? We will survey the analytics we have employed for the former question, where we developed an approach based on continuous-time Markov chains combined with integer programming models to compute daily stocking levels for the bikes, as well as methods employed for optimizing the capacity of the stations. For the question of mitigating the imbalances that result, we will describe both heuristic methods and approximation algorithms that guide both mid-rush hour and overnight rebalancing, as well as for the positioning of corrals, which have been one of the most effective means of creating adaptive capacity in the system. 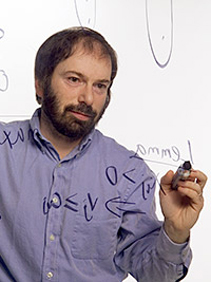 BIO: David Shmoys is the Laibe/Acheson Professor at Cornell University in the School of Operations Research and Information Engineering, and also the Department of Computer Science at Cornell University, and is currently the Director of the School of Operations Research and Information Engineering. Shmoys’s research has focused on the design and analysis of efficient algorithms for discrete optimization problems, with applications including scheduling, inventory theory, computational biology, and most recently, on stochastic optimization models and algorithms in computational sustainability. His graduate-level text, The Design of Approximation Algorithms, co-authored with David Williamson, was awarded the 2013 INFORMS Lanchester Prize. He is an INFORMS Fellow, a Fellow of the ACM, a SIAM Fellow, and was an NSF Presidential Young Investigator; he has served on numerous editorial boards, and is currently Editor-in-Chief of Research in the Mathematical Sciences (for theoretical computer science) and an Associate Editor of Mathematics of Operations Research.